How to deploy Prefect on AWS ECS

In this tutorial we’ll walk through how Pocket deploys the Prefect data pipeline framework to ECS.

Why Pocket chose to use Prefect

Pocket is a part of Mozilla where we empower people to discover, organize, consume, and share content that matters to them. Our data is relatively small in size, but for a small team, we do support a lot of products with various data needs. For years, Pocket used Astronomer Airflow and in-house solutions side-by-side to run data processes. While Airflow is a very powerful tool, our engineers experienced a steep learning curve. Not to mention our in-house solutions, which suffered from a lack of observability.

After reviewing our options, we concluded that Prefect was the best long-term solution to support Pocket’s needs. What we like best about Prefect is how easy it is to pass data between tasks: it is as simple as passing the return value of one task into a parameter of another, just as you would for any other Python program.

The table below outlines the decisions that we took in deploying Prefect.

Our use of Prefect (see architecture diagram below) has several security benefits: 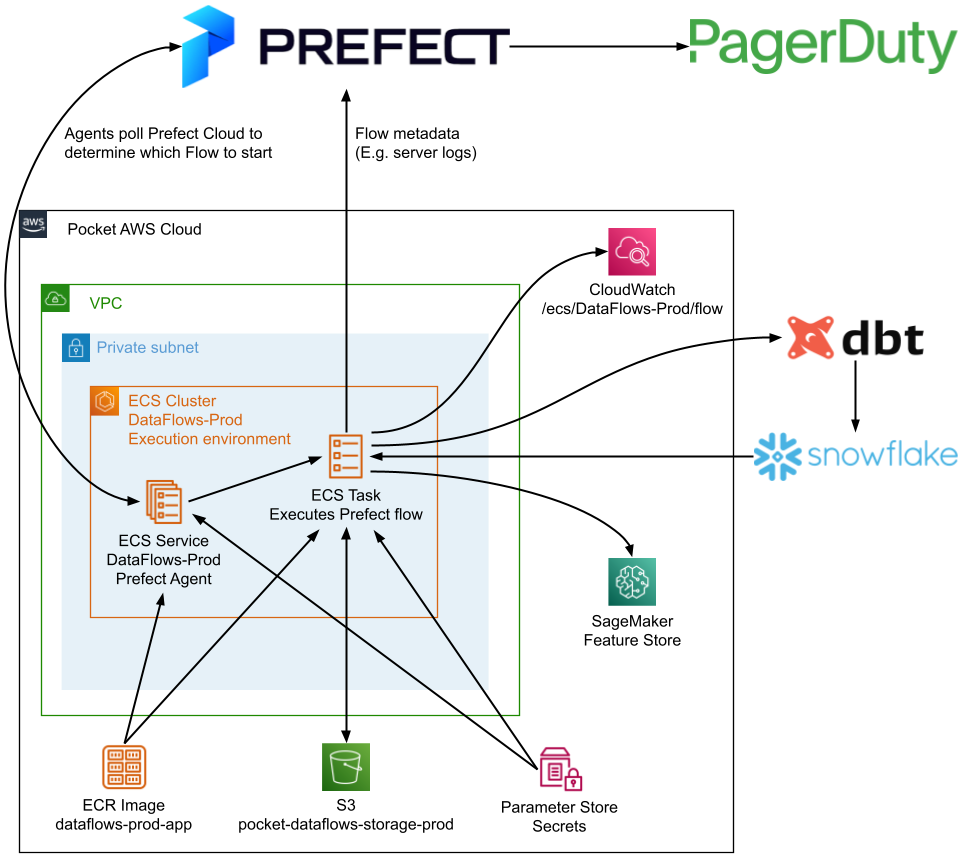 Accounts that you’ll need to register for:

Tools that you’ll need to have installed:

Optionally, if you’re new to CDK for Terraform, it might be helpful to watch our YouTube workshop where we show how to deploy a simple service to ECS using CDK for Terraform. We even built helpful abstracted constructs for you to use!

The steps below deploy Prefect to your AWS account. Our repo supports deploying to a ‘development’ and ‘production’ AWS account. In this tutorial we’ll only do the former. If you get stuck, feel free to ask me (@Mathijs Miermans) a question in the public Prefect Slack.

At Pocket, we have fully automated creating new services. For this tutorial, we’ll need to manually create a few resources in AWS to kickstart continuous deployment.

2.1. Create a CodeStar connection to Github

You can skip this step if you already have a CodeStar connection with access to your forked data-flows repo.

2.3. Attach the ‘AdministratorAccess’ policy to the CodeBuild IAM role

This SNS topic is required to exist for deployment to succeed, but we won’t use it for this tutorial. You can choose to subscribe to this topic to be notified when deployments happen. 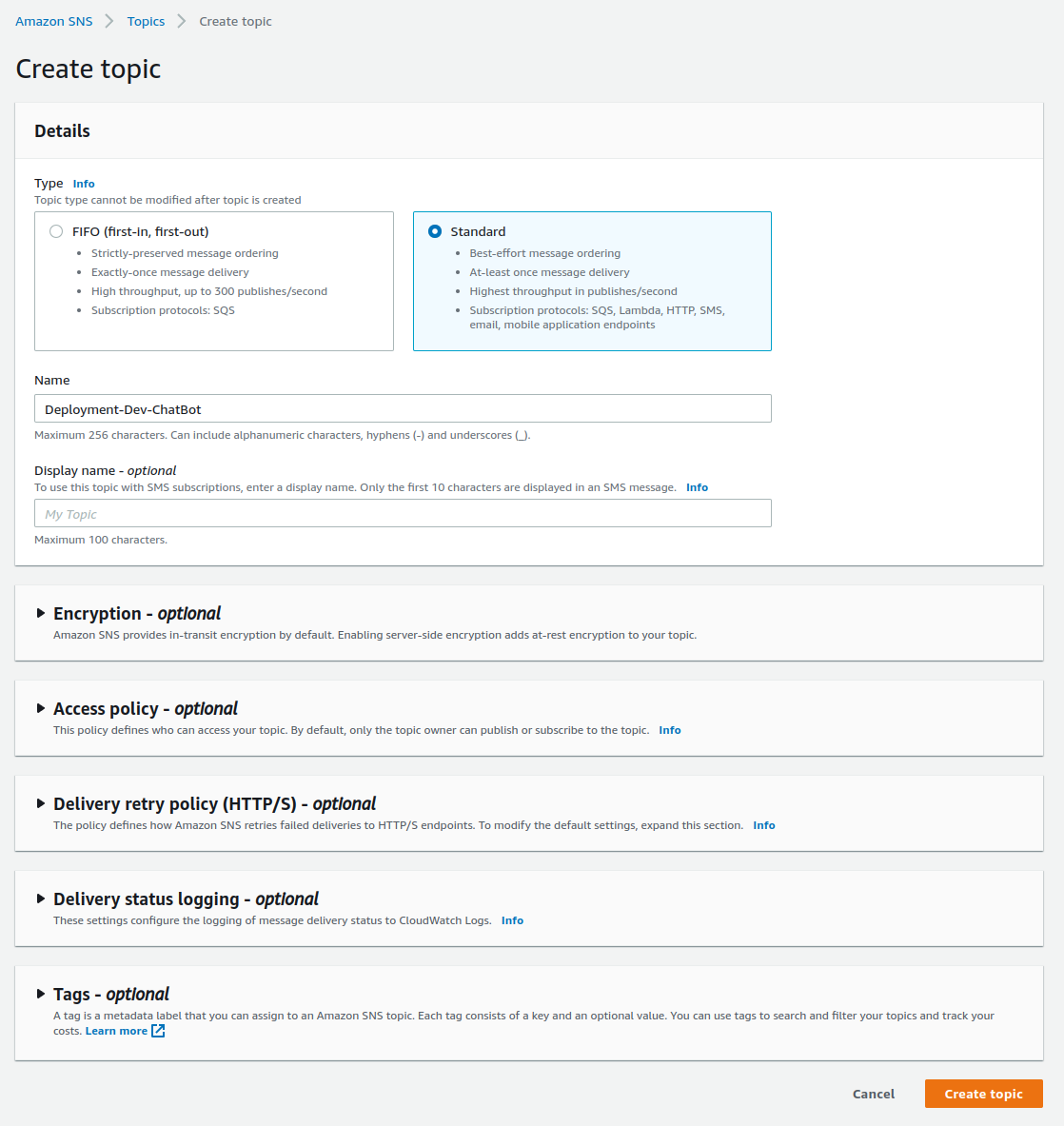 Open .aws/src/config/index.ts in a text editor to make a few changes:

Source code for Flows is located in the src/flows/ directory of your forked repo.

Your changes by now should look something like the screenshot below. 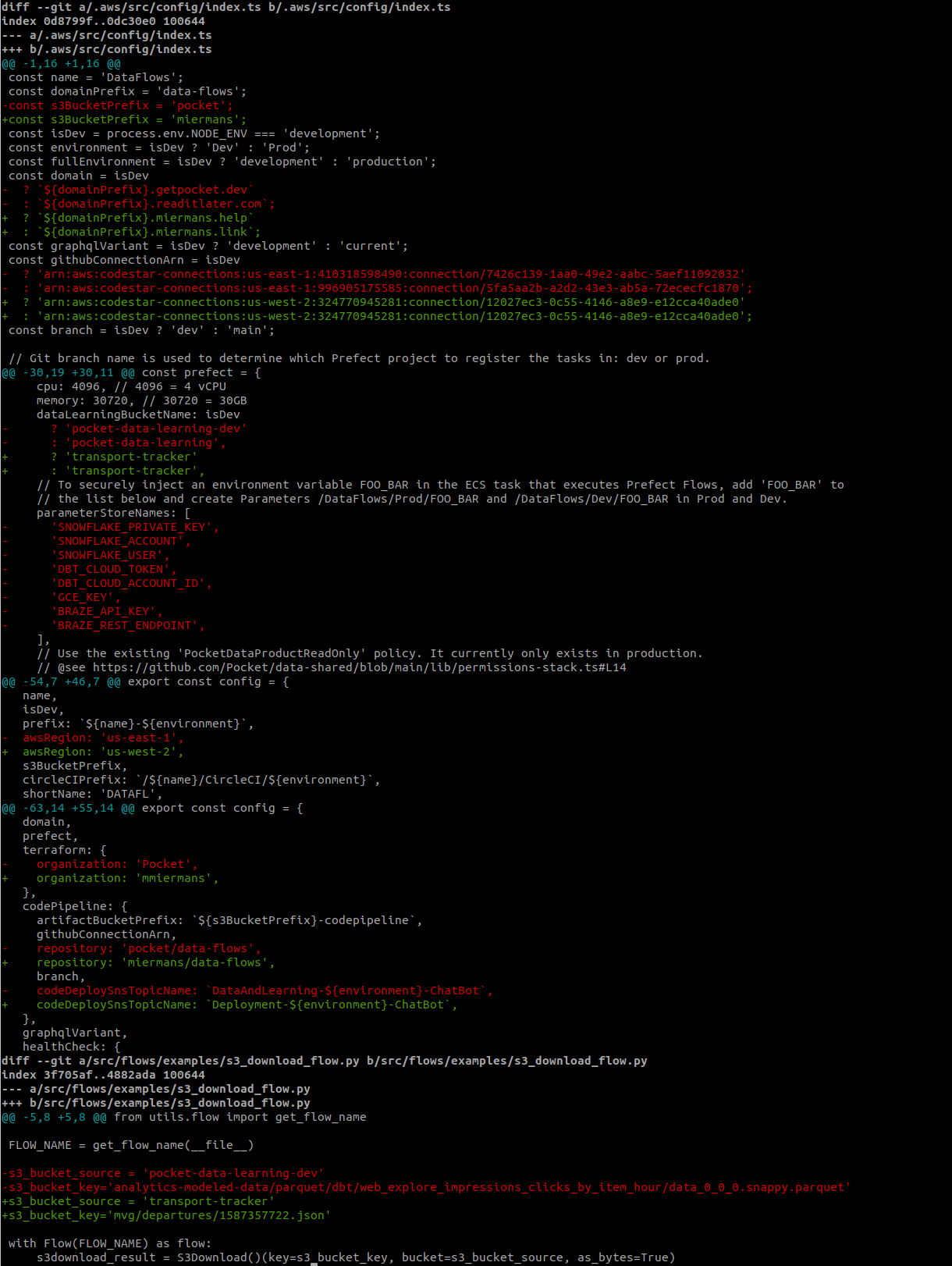 Create two workspaces called DataFlows-Dev and DataFlows-Prod. Both are required to exist for the deployment to succeed, even though we’ll only write Terraform state to DataFlows-Dev for this tutorial.

For both workspaces, change ‘Execution Mode’ in general settings to ‘Local’: 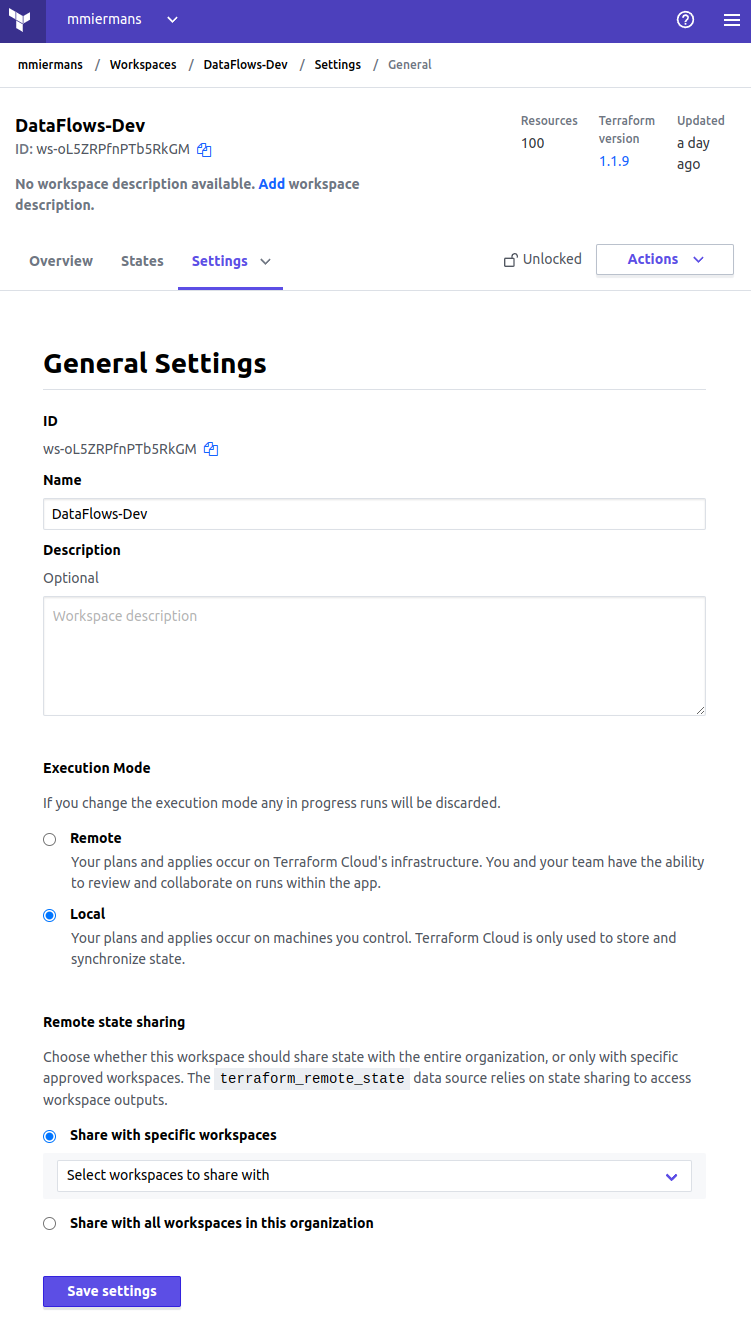 Create parameters in the AWS Systems Manager Parameter Store according to the following table. /DataFlows/Dev/PREFECT_API_KEY was created previously during step 4 and is listed only for completeness. If you don’t yet have a VPC with private and public subnets, you can create one using our VPC guide.

Store a secret in the AWS SecretsManager called ‘CodeBuild/Default’ with keys:

Create a secret in the AWS SecretsManager called ‘Shared/DockerHub’ with keys:

For this tutorial, we’ll run CDK for Terraform in a terminal:

We’ve configured Prefect to store our code in a Docker image. We consider this more reliable than storing code on S3 because code is accessed in the same way during local development and production. The downside is that we need to build the Docker image every time we deploy to AWS, but continuous deployment takes care of this automatically at Pocket. For this tutorial, we’ll build and push the Docker image manually:

Go back to the AWS console, click on the refresh button in the dataflows-dev-app, and confirm that an image got pushed called ‘latest’.

At this point, everything is set up to deploy the Prefect Agent to ECS. Go to DataFlows-Dev-CodePipeline and click on ‘Release change’. The pipeline consists of three stages:

It’ll take about 10 minutes for the CodePipeline to finish running, after which it should look like the screenshot below. 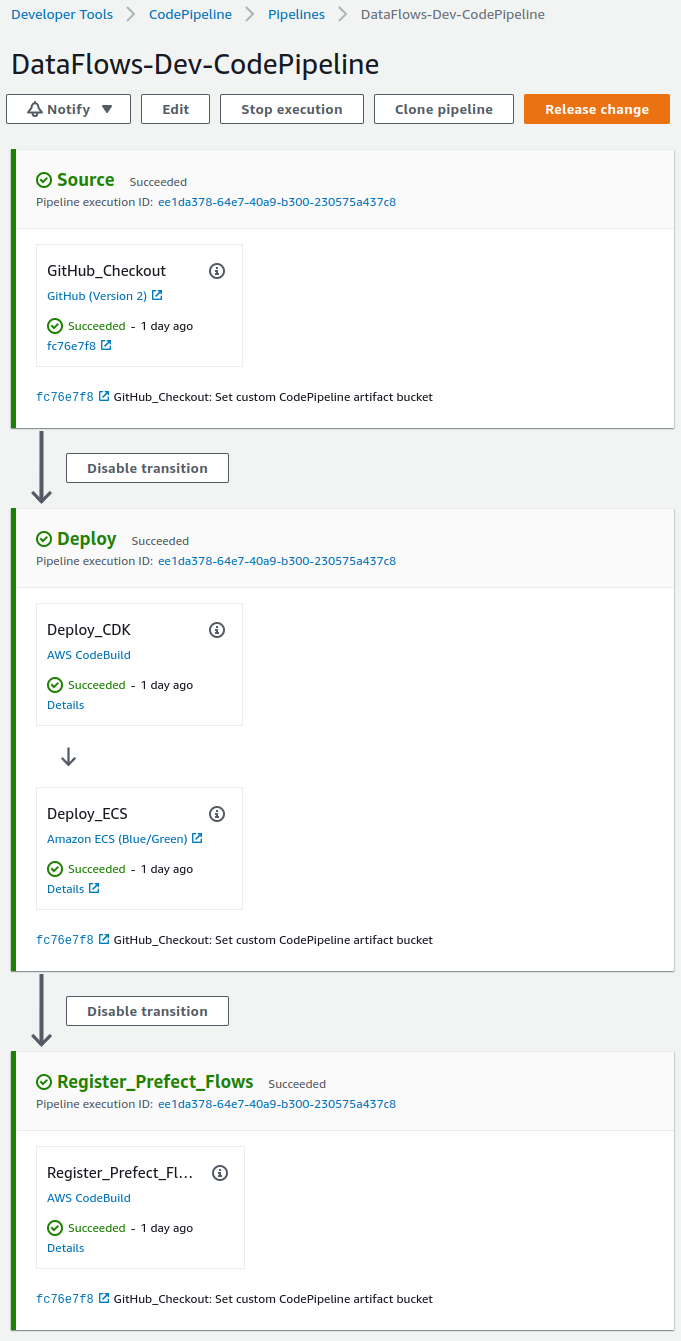 Step 10: Test the setup by running a flow from Prefect

Go to the ‘dev’ project in Prefect Cloud. The flows in Prefect should match the ones in the src/flows directory. Go into the flow examples/s3_download_flow click on ‘Quick run’ to try it out. It should succeed if the S3 bucket and key that you provided are present. 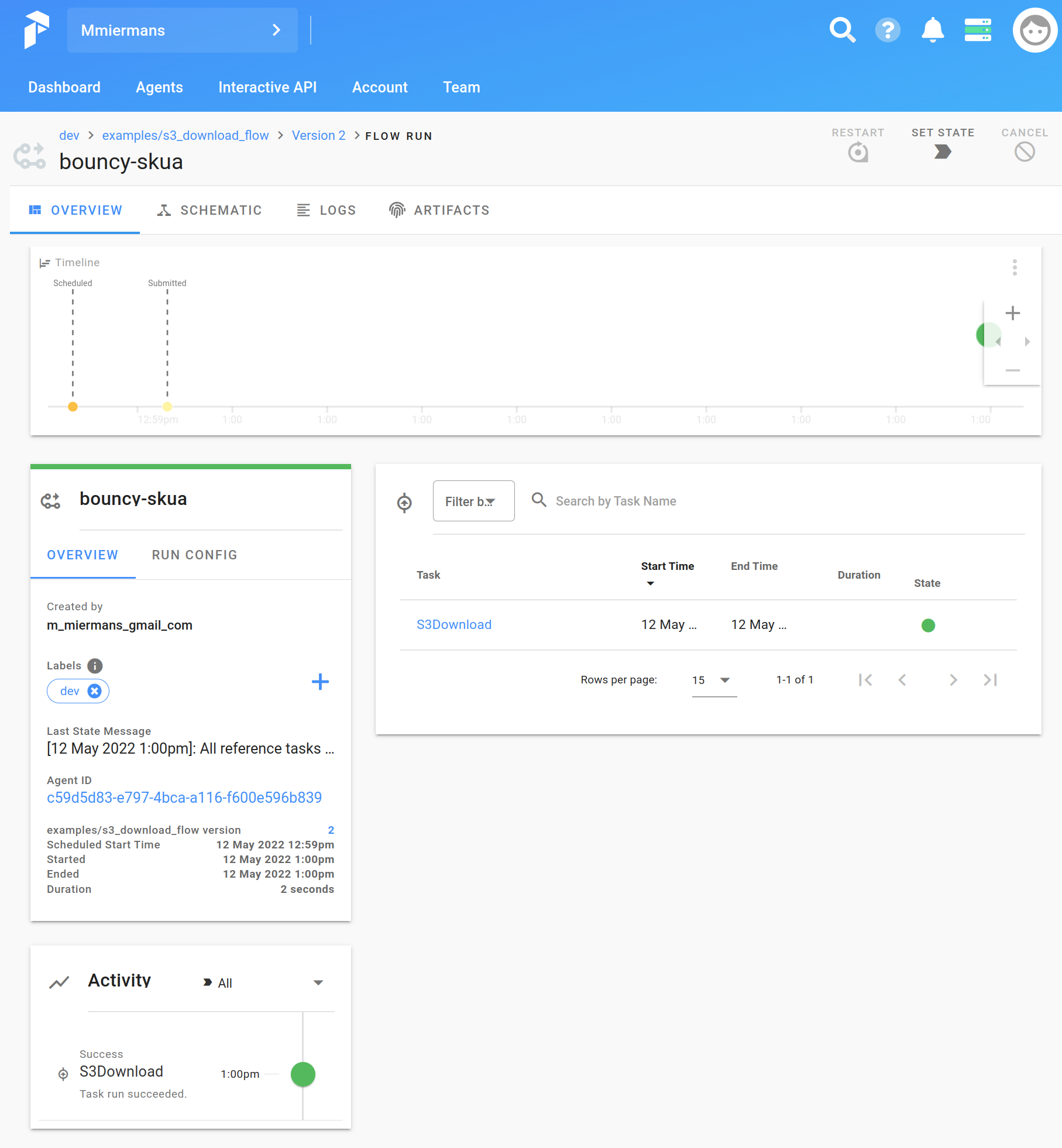 Congrats if you followed all steps! At this point, we have a secure, scalable Prefect deployment, with the beginnings of continuous deployment.

If you’re done with this tutorial and don’t want to incur any further costs from AWS, here’s how to delete all AWS resources created as part of this tutorial: